Thx to Yvonne & Beat for the very kind review and feature - 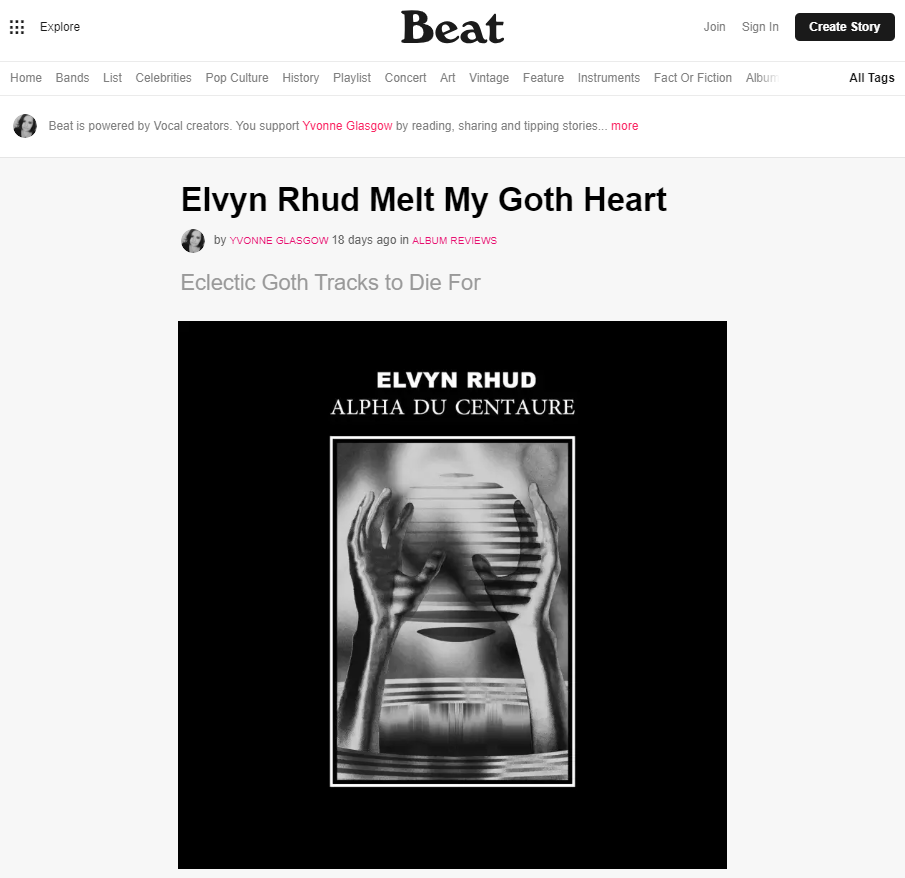 A month ago a cool 7” split EP was released that contains three cool tunes, two of them from the duo I am going to talk about in a moment, Elvyn Rhud. The other song is from Alpha Du Centaure. I have to say, if you like the main track from Elvyn Rhud, “Orange Is For Love,” you’ll enjoy all three of the tracks on this split. You can check it out on Bandcamp, but I’d suggest getting it on vinyl (it’s way affordable, and vinyl is awesome).

So, Elvyn Rhud is a duo from France. The band is Leo Puy and Cassandre Arpin. The two started out as roommates and then got into a relationship, which lead to their collaborating musically as well. Cassandre can be heard on percussion and vocals, while Leo is on guitar and vocals.

I love the dark, gothic, grungy sound to this track. It’s eclectic and mystical and makes me think of naked witches dancing in a circle around a fire. It’s beautiful and morose. The lyrics have a melancholy feel to them as well—lost in a tunnel of despair, and you simply hear the echoes of the words that are spoken.

The song is over far too quickly. Because of that, I want to also talk a little bit about the other Elvyn Rhud song on the split. That one is titled “People In Hampton Court Don’t Care About Dying.” This track made me think of a funeral march and of death (I guess that makes sense with the name of the song and all).

This song is really dark and musical—the instruments embody the song, and the lyrics are just part of the background. This duo has some extremely gothic sounding music, with an edge of something else. I’m not really able to articulate exactly what that something else is.

I think the thing I loved the most in both songs from Elvyn Rhud was the tambourine, which made me think of Mazzy Star. I don’t think there’s enough tambourine in music these days, and it really gives it an eclectic tone that makes it more mysterious.

I have to be completely honest—after listening to the three tracks on this split vinyl EP, I had to order my own copy. It’s a whole $11 with shipping on Bandcamp—well worth it for vinyl with some unique music (unique these days anyway). I haven’t heard goth music this good since the 90s, at least. Whether or not the band considers themselves goth, I feel like that is an extremely fitting genre for them.

Their music is dark and mysterious. It has such moody and shallow vocals that it almost makes your skin crawl. You want to shroud yourself in black and go visit a graveyard while you play these tracks on your iPod. It’s mood music if you want your mood to be dismal and dreamy—because it’s not “slit your wrists” goth, it’s “makes you want to sway like a tree in the cool Halloween breeze” goth.

I think if you only give one new band a go this year, if you only listen to one new track on Bandcamp or Soundcloud this month, this should be the band and “Orange Is for Love” should be the song. If you like gothy, eclectic music that feels like a warm hug from a ghost in the night, you’ll fall in love with this band too.