Hidden Cabins EP the Record of the Week at The Aquarian

Thx to Bob & The Aquarian for the nice review and feature - 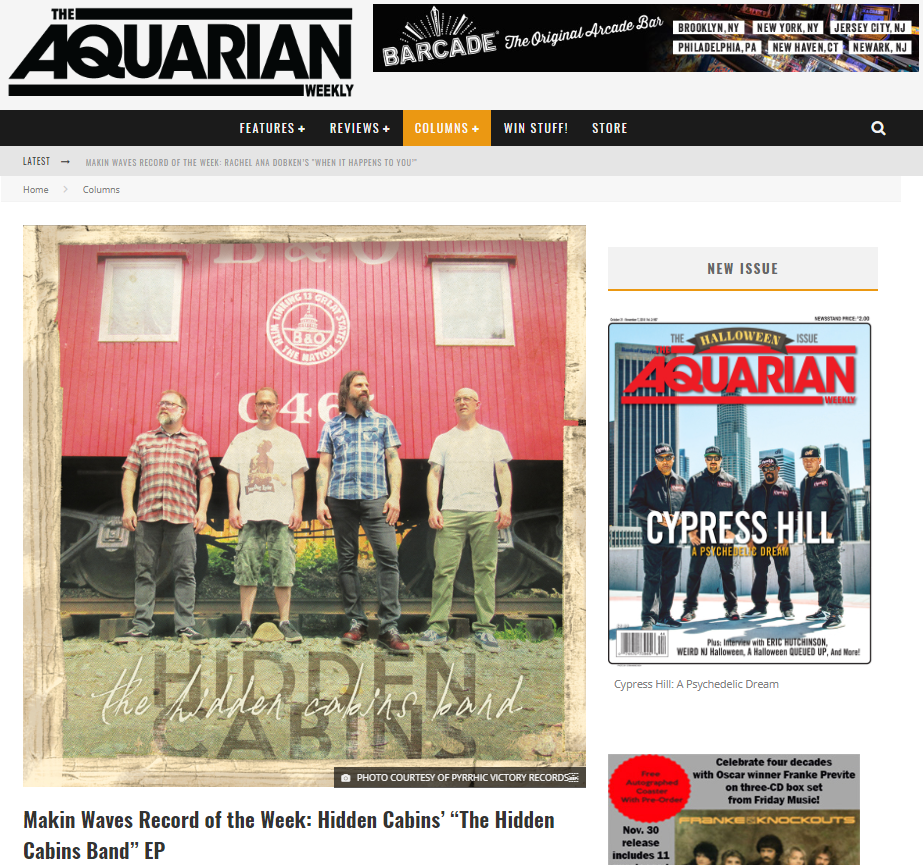 Hidden Cabins will celebrate the release of their new EP on North Jersey-based Pyrrhic Victory Records on Oct. 13 at The Harp ‘N’ Bard in Clifton.

Hidden Cabins are a great alternative roots-rock band from North Jersey who will release the five-song The Hidden Cabins Band EP on October 12 on Pyrrhic Victory Recordings. The outing is the band’s first as a four-piece following several releases as a duo. Vocalist-percussionist Craig Cirinelli and guitarist Brian Hofgesang now are joined by The Skels drummer Rich Perry and The Suspects bassist Jason Del Guidice.

Their studio collaboration opens with “The One that Got Out,” a poetic jangle slightly reminiscent of R.E.M., but meatier, that borrows a bit o’ melody from Red Hot Chili Peppers’ “Scar Tissue.” The title refers to a friend who exits a small town that seems to bring its people down.

That restless spirit continues with “News at 11,” which compares reports of abuse to that within one’s own circle of family and friends, understandably marking such situations preferable to watch than experience. A sweet, soulful organ played beautifully by Hofgesang drives this tasty track and makes it one of the standouts.

That honor also goes to the ironically intense “The Calming,” which features the record’s best lyrics: “Aggression won’t teach my young/Accept all that they’ve done.” The chilling look at anger management hits hard on many levels.

Also tasty is “One More Sip,” which sounds like Train without the pop theatrics. The accessible approach to roots music, however, makes for the EP’s most rhythmic track, as well as a rich showcase for Perry’s talent. I also will like the atmospheric effects that break up the middle of the track with a haunting vibe.

The closest thing to a clunker among the bunch is the overlong closer, “Bet It All on You,” which gambles on a grandiose “Hey Jude”-like conclusion by repeating a verse over and over in a variety of different vocal and musical ways. But Cirinelli is not Paul McCartney and “Bet” is no “Hey Jude.”

It’s a shame too because before the five-minute ending, it’s a very strong four-minute acoustic song with an exotic melody and instrumentation that has an Asian tinge, particularly kabuki theater. Perhaps it’s better as a live jam, which may be the case when Hidden Cabins celebrate the release of the EP on October 13 at the Harp ‘N’ Bard in Clifton. Sharing that bill will be Reese Van Riper, The 65’s, and T. Gunn & the Semantics. Hidden Cabins also will play October 14 at Erie 80 MTB Festival at Riverside Park in Port Jervis, N.Y.