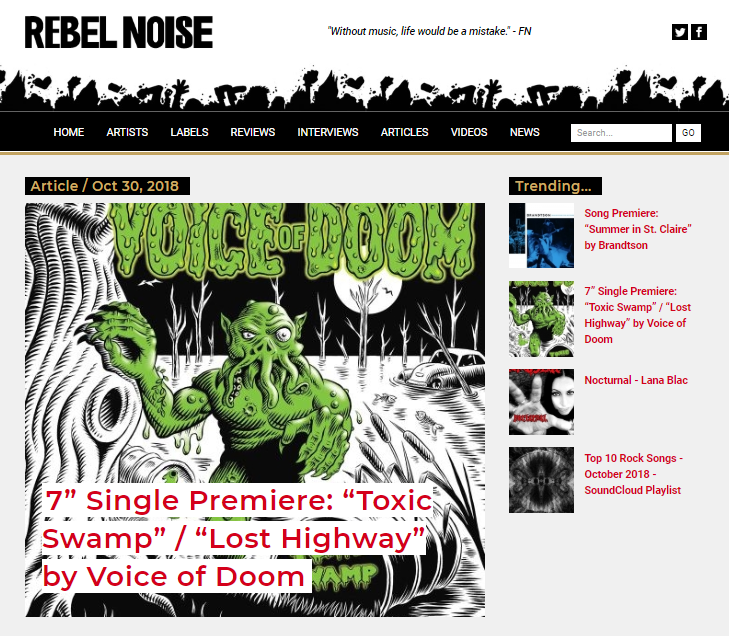 Coming from the bowels of hell, well, no actually a sludgy quagmire in Northern New Jersey, Voice of Doom surfaces with a terrifyingly terrific “Toxic Swamp” 7” courtesy of Pyrrhic Victory Recordings.

The 2-headed (well, actually 2-track) sonic beast will be unleashed on Halloween day, but Rebel Noise gives you a treat a day early with the premiere of the 7” in full – No trick!

Voice of Doom is a veteran band and their old-school music has withstood the test of fickle teenagers flocking to grunge, emo, and punk-pop acts over the years. Formed from the remnants of defunct The Systum in 1986, Voice of Doom was a mad scientist creation; an experiment in combining metal and punk (think a musical fusion of Black Sabbath and Black Flag, respectively). The Frankenstein creature lived for only 3 years, collapsing prematurely in 1989.

But in a moment straight out of a horror movie, Voice of Doom returned from the dead in 2014, a quarter century after its supposed demise. Punk rock only became the skeletal framework for all of the songs and the legend of VOD (no, not video on demand) lives on to this day, with several EPs and singles swarming around the resurrected musical corpse (like two Misfits covers for Halloween 2015 and 2016’s Screams In Space).

Dare to bend an ear and get it ripped to shreds by the dynamically old-school tuneful rampage of “Toxic Swamp”. The second number “Lost Highway” burns rubber and doesn’t look back, propulsively careening down the tracks.

The super-cool artwork for the 7” was done by Huw Evans who’s designed material for Electric Frankenstein and more. “Toxic Swamp” 7” releases on swamp green-colored vinyl.