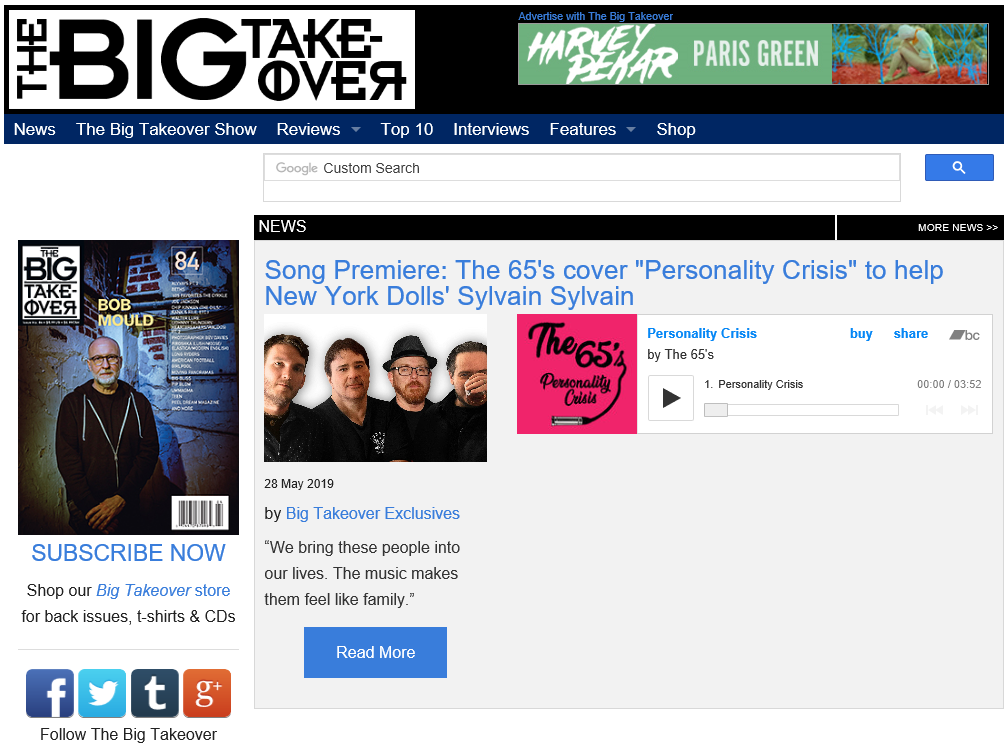 New Jersey indie-rock labels Dromedary Records and Pyrrhic Victory Recordings have teamed up with punk veterans The 65’s to release a cover of the New York Dolls classic “Personality Crisis.” All proceeds will be contributed to the GoFundMe campaign of Dolls guitarist Sylvain Sylvain, who is undergoing cancer treatment.

The project began with a discussion online between the owners of the two labels, lamenting the state of health care in America, and evolved into a collaborative project.

“You don’t want to hear anyone has been diagnosed with cancer,” said 65’s guitarist and Pyrrhic Victory owner Joe Pugsley. “I lost my father to it a year and a half ago and I know the drill. When I saw the GoFundMe page it upset me. Sylvain Sylvain and the New York Dolls were and continue to be such a huge influence on me that it felt personal. We bring these people into our lives. The music makes them feel like family.”

“Sylvain Sylvain and the New York Dolls were and continue to be such a huge influence on me that [his cancer diagnosis] felt personal. We bring these people into our lives. The music makes them feel like family.”

“Here’s a punk legend, suffering from a really difficult disease, and he’s asking people for money to help out,” added Dromedary owner Al Crisafulli. “We live in one of the wealthiest countries in the world, and here we are, still unable to provide health care for everyone, still arguing about whether or not we all deserve treatment for a life-threatening disease. It’s such a disgusting argument. It’s beneath us to even have the discussion – and yet here we are, in 2019, listening to our own leaders as they try and strip away whatever weak protections we have.”

“The idea for the project seemed to stem organically as I was chatting with Al about it,” continued Pugsley. “He asked ‘How fast can you come up with a cover of ‘Personality Crisis?’. Say no more – we banged it out in a day. What a blast!”

The labels hope to bring attention to Sylvain’s GoFundMe page and hopefully help drum up more donations. The single is available by digital download from each label, and the companies have produced a limited run of ten handmade lathe-cut 7” singles. Every penny from the sales will be contributed to Sylvain Sylvain via GoFundMe.

The downloads and singles can be purchased from Dromedary or from Pyrrhic Victory. You can also donate directly to Sylvain Sylvain’s Medical Support Fund.