"his style pulls in elements from all segments of his background, from punk and rock to country and blues" 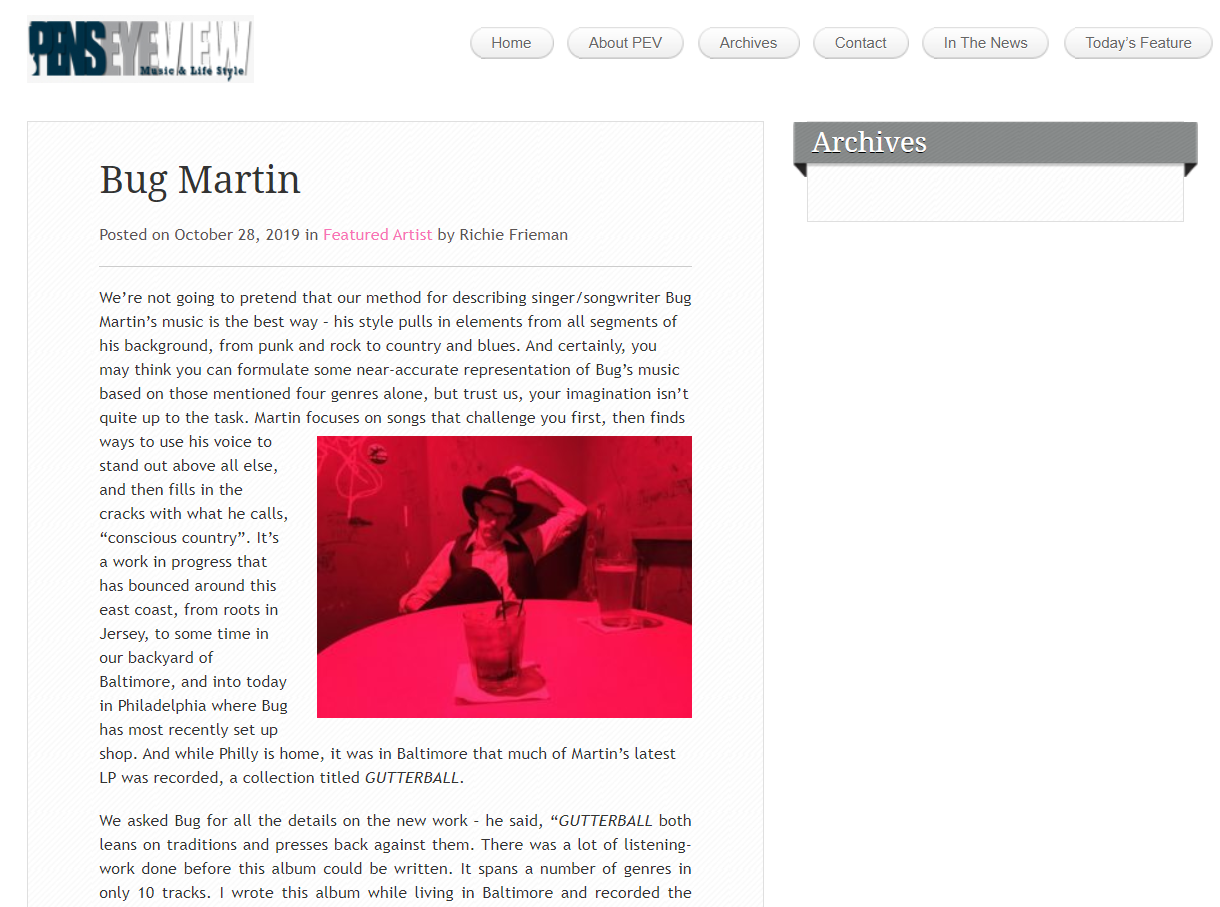 We’re not going to pretend that our method for describing singer/songwriter Bug Martin’s music is the best way – his style pulls in elements from all segments of his background, from punk and rock to country and blues. And certainly, you may think you can formulate some near-accurate representation of Bug’s music based on those mentioned four genres alone, but trust us, your imagination isn’t quite up to the task. Martin focuses on songs that challenge you first, then finds ways to use his voice to stand out above all else, and then fills in the cracks with what he calls, “conscious country”. It’s a work in progress that has bounced around this east coast, from roots in Jersey, to some time in our backyard of Baltimore, and into today in Philadelphia where Bug has most recently set up shop. And while Philly is home, it was in Baltimore that much of Martin’s latest LP was recorded, a collection titled GUTTERBALL.

We asked Bug for all the details on the new work – he said, “GUTTERBALL both leans on traditions and presses back against them. There was a lot of listening-work done before this album could be written. It spans a number of genres in only 10 tracks. I wrote this album while living in Baltimore and recorded the demos on a thrift-store tape recorder before creating the higher-fidelity versions. It was important to get them out in that way first. They can be rough songs about complex concepts and several were re-written a dozen times after listening to the demos repeatedly. This is music to digest slowly.” Click to  https://bugmartinband.bandcamp.com/ to get into GUTTERBALL for yourself, and dive in for more of Bug’s music…of course, right after you wrap up a very thorough read of all the answers to the XXQs below.

PensEyeView.com (PEV): How would you describe your sound and what makes you stand out from others in your genre?

Bug Martin (BM): The label I often put on my music is ‘conscious country’. I describe it as ‘conscious’ because it follows a long history of introspective and experimental artists in the country tradition whose music may appear simple on its face, but can run the ringer of explication on par with the likes of some great literature. I’ve billed myself before as more of a storyteller than a musician. I don’t have the chops that scores of country, blues, or bluegrass players do on their instrument, but I try to use my voice in a way that is true singularly to myself.

PEV: What kind of music were you into growing up? Do you remember your first concert?

BM: Growing up I was into punk, into noise-rock, and what some folks labeled ‘new weird America’. I think exploring these outsider genres was fundamental in what you hear when you listen to my tunes either sonically or thematically. It wasn’t until I left New Jersey where I was living for a good deal of my youth that I really dove into old-time, classic country, blues, etc.

My first concert was a little hometown label’s showcase in a parking lot behind a glass-blowing studio. It was a punk show, but there was a mechanical bull set up for some reason. Everything comes full circle, you see.

PEV: What was it like trying to break into the music scene when you first started? What was your first show like?

BM: I grew up in a town that had a lot of active young bands. We all sorta got to know one another through a burgeoning DIY scene that relied on young people being willing and able to work together and trust from community centers and coffee shops that we wouldn’t end up burning the building down somehow.

I played acoustic guitar and did a kind of scream/sing in a folk punk group with my brother on bass, and friends of ours on accordion and drums (a floor tom and a snare, to be specific). We were not like most of the other bands in our scene, but I think they respected what we were trying to do.

PEV: What can fans expect from a live Bug Martin show?

BM: Expectations are tough to predict. Often I have people come up and tell me, “You know, I don’t like country music but I like what you do.” It’s hard to break it to someone that they may, in fact, like country music.

To answer the question, what I try to deliver is an experience that is personal, vulnerable, and entertaining.

PEV: What is the first thing that comes to mind when you step on stage to perform?

BM: I do my best to set ambience and unify people’s attention. I don’t enjoy a show where it feels like music is being played at people. I’ve done a few festival-type shows and it never feels right; I’ll take a living room show any day over a gigantic impersonal club/arena show.

PEV: What is the best part about being on stage in front of an audience?

BM: I am not an innately outgoing person, so being on stage is not always a simple matter for me. But, as I’ve mentioned here before, feeling like you’re truly connecting with an audience and giving them pause for a moment to experience something they may not be expecting from a show in, say, a rock club, is always a good thing.

PEV: What is the underlying inspiration for your music?

BM: An appreciation for and understanding of the role of suffering. No light without darkness and contrariwise.

PEV: Thinking back to when you first started out, do you ever look back on your career and think about your earlier days and how you’ve arrived where you are today?

BM: It is as Woody Guthrie says, “I ain’t ever got nowhere, but I got there by hard work”. I am at best analytical of my past, at worst sentimental.

PEV: What’s one thing we’d be surprised to hear about you?

PEV: What happens when you hit a brick wall when writing? What are your methods to get over it?

BM: There’s nothing worse than a shoehorned creative work. I have concepts and lines in piles that I’ve written every which way but the right one. These things take time, and I have no say in how long they take to reveal themselves to me. Accepting the fluctuating role of time in the process is the only way for me to really make progress.

PEV: How do you think the industry has changed since you first started out?

BM: I’m in no way qualified to speak to ‘the industry’, but I will say I think as a result of the industrialization of music it has been unfortunately and effectively declawed in most cases. We’re living in escapist times. It is important for us to learn to sit with uncomfortable and challenging feelings to gain the ability to understand them – now that’s entertainment!

PEV: What can fans expect from your latest LP, GUTTERBALL? What was the writing process like for this work?

BM: GUTTERBALL both leans on traditions and presses back against them. There was a lot of listening-work done before this album could be written. It spans a number of genres in only 10 tracks. I wrote this album while living in Baltimore and recorded the demos on a thrift-store tape recorder before creating the higher-fidelity versions. It was important to get them out in that way first. They can be rough songs about complex concepts and several were re-written a dozen times after listening to the demos repeatedly. This is music to digest slowly.

PEV: With all your traveling, is there one area you wish you could travel around and play that you have not yet?

BM: I’d love to travel to each state in the US. I enjoy interacting with people who think and live different from me. I’ll go anywhere there’s folks who understand the art of listening.

PEV: How have all your friends and family reacted to your career?

BM: Some get it, some don’t. Generally folks are supportive.

PEV: What can we find you doing in your spare time, aside from playing/writing music?

BM: Existing in time is a research project with no end. It’s all I do.

PEV: Name one present and past artist or group that would be your dream collaboration. Why?

BM: You know, I would really like to work with Phil Elverum. He seems nice and I appreciate his approach to ‘songwriting’ and ‘sound creation’ as uniquely separate but related disciplines.

PEV: Is there an up and coming band or artist you think we should all be looking out for now?

BM: No band. All the things you should be listening for are inside you already.

PEV: If playing music wasn’t your life (or life’s goal), what would you do for a career?

BM: I do a fair amount of brewing/fermentation work and work around environmental issues outside of making music. I’m fascinated by nature and my place in it and these fields help me experience the magic of nature in ways that keep me curious.

PEV: So, what is next for Bug Martin?

BM: Hopefully more writing and recording in collaboration with folks I’m meeting from the Philly scene. Definitely more shows up and down the east coast, maybe further west if the stars align. I’ll be around; cheers until then.