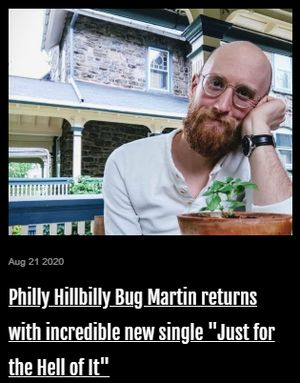 Philly hillbilly Bug Martin has been active since 2014 and has self released multiple EPs, 2 full lengths, and even a Christmas record. His 3rd full length "Gutterball" was released last year via Pyrrhic Victory Recordings and received great press and won over many new fans. His unique yet somehow also traditional country twang will leave you mesmerized (if not hypnotized) and leave you simply wanting (if not craving) more. This new single "Just for the Hell of It", the 2nd from his upcoming full length, is no different. It will just suck you in more, if you haven't already been convinced. Bug has a new band backing him up, hence the "& Co" - and the instrumentation is simply incredible. Don't take my word for it, just give it a spin. The new full length "All That Is and What Ain't" will be released September 4 via PVR and will be available for pre-order soon. Links to social media and more music below. Enjoy!