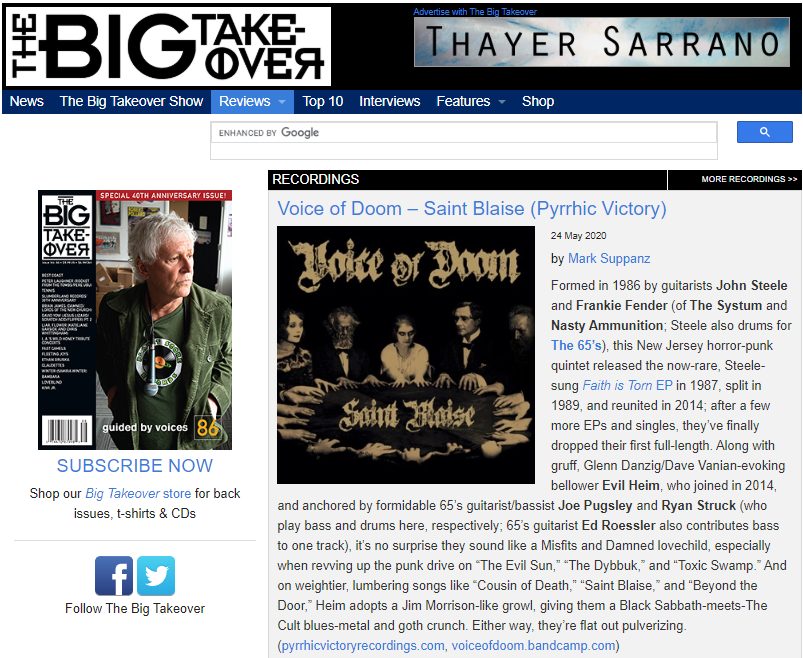 Formed in 1986 by guitarists John Steele and Frankie Fender (of The Systum and Nasty Ammunition; Steele also drums for The 65’s), this New Jersey horror-punk quintet released the now-rare, Steele-sung Faith is Torn EP in 1987, split in 1989, and reunited in 2014; after a few more EPs and singles, they’ve finally dropped their first full-length. Along with gruff, Glenn Danzig/Dave Vanian-evoking bellower Evil Heim, who joined in 2014, and anchored by formidable 65’s guitarist/bassist Joe Pugsley and Ryan Struck (who play bass and drums here, respectively; 65’s guitarist Ed Roessler also contributes bass to one track), it’s no surprise they sound like a Misfits and Damned lovechild, especially when revving up the punk drive on “The Evil Sun,” “The Dybbuk,” and “Toxic Swamp.” And on weightier, lumbering songs like “Cousin of Death,” “Saint Blaise,” and “Beyond the Door,” Heim adopts a Jim Morrison-like growl, giving them a Black Sabbath-meets-The Cult blues-metal and goth crunch. Either way, they’re flat out pulverizing.